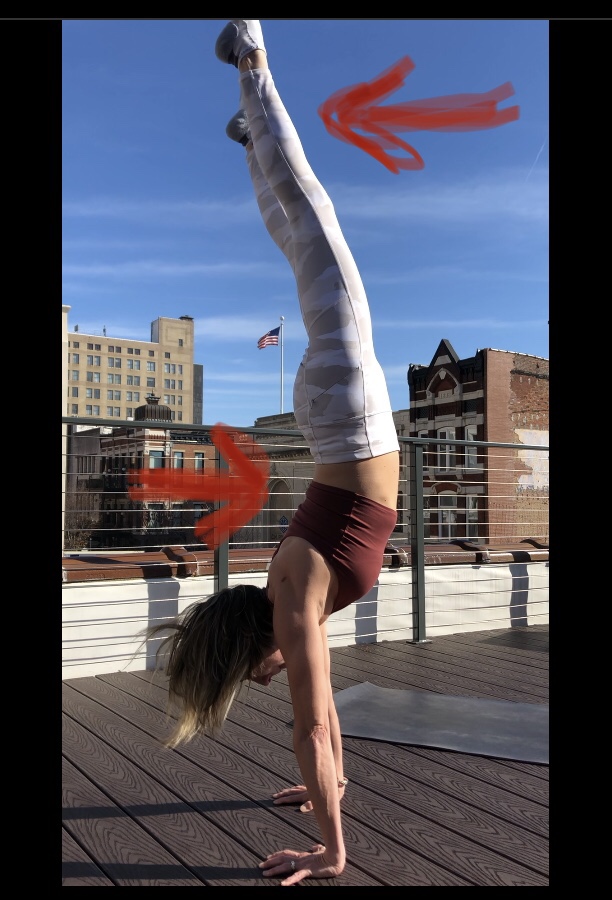 “Failure is not the opposite of success. It’s part of it.” — Arianna Huffington

One of my goals is to eventually take my handstand on the road and get photographs of myself handstanding in front of local — and some day more well-known — landmarks. (Picture me confidently handstanding in front of the Eiffel Tower — shoulders in line, toes pointed, feet together, holding long enough to take numerous photos, and then coming out of the pose after holding for a good 30 seconds.) Since I’ve been kicking up and holding on a fairly regular basis, I started thinking that maybe, just maybe, I was ready to handstand somewhere other than my home or yoga studio with someone other than my dog or another yoga instructor watching.

My first opportunity: a rooftop in downtown Evansville, IN where I was doing a plank break with my friend Elaine. (I do a five minute plank every day on the Yoga 101 Facebook page.) It was a beautiful day, the temperature was comfortable, and the view was a good one. I knew I’d kick myself later if I didn’t take advantage of the moment and get at least one photo of myself doing a handstand on a rooftop.

But then I reminded myself that this time last year, I wouldn’t have attempted a rooftop handstand. I wouldn’t have tried to kick up outdoors in front of someone different. And I wouldn’t have taken the risk of possibly making a fool of myself on video, while strangers could potentially be watching from downtown office windows. With that realization in mind, I licked my wounds, looked at the rooftop video again, and salvaged a shot to post (with arrows pointing out my obvious errors).

I became even more determined, and let go of the disappointment. I’ve come too far in this handstand journey to beat myself up over a failed photo opportunity. The next day, I was back at it in the bedroom, finding the 10 second hold that had so cruelly eluded me the day before. Sigh.

I was disappointed, and even a bit discouraged. But today, I’m determined. Determined to keep trying and improving. Determined to not let my failed attempts deter me from continuing this fabulous journey. Determined to one day go back to that rooftop and nail a handstand!