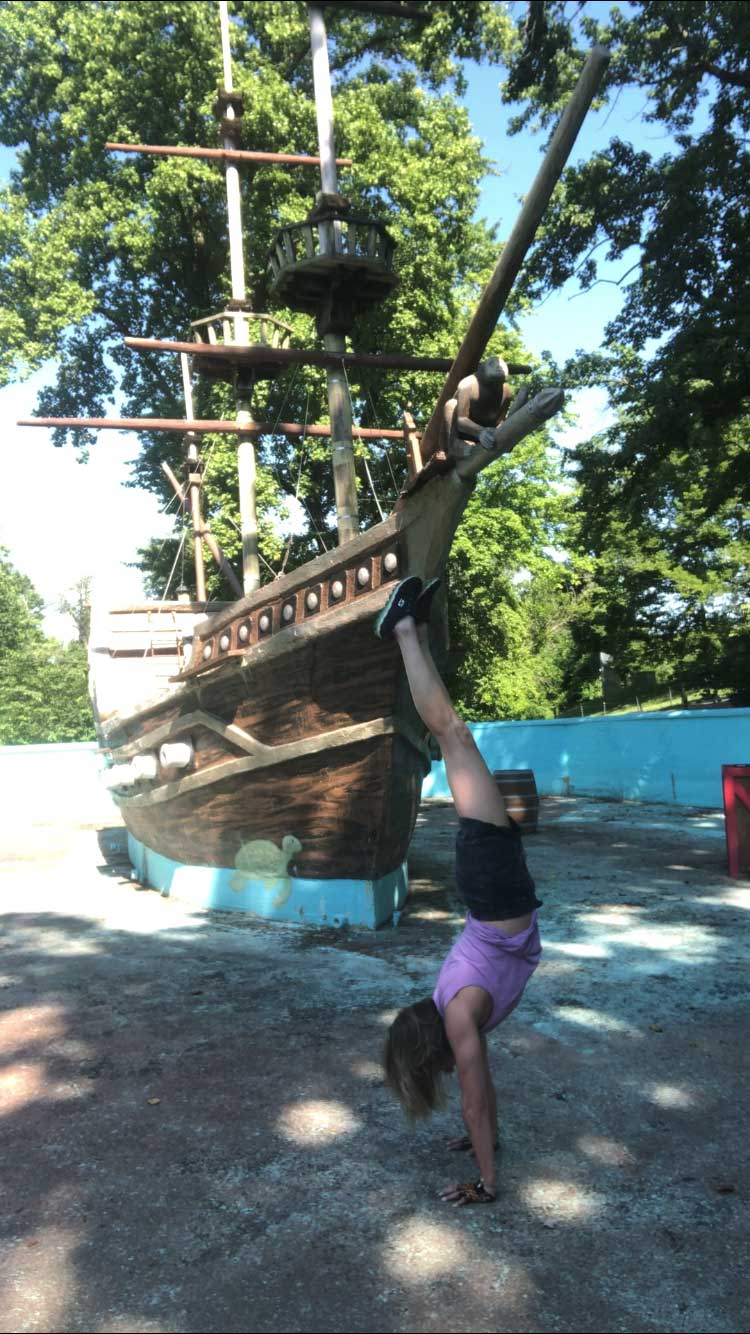 Most people go to the zoo to look at the animals. I, however, recently went to Mesker Park Zoo to do a five minute plank — with the thought in the back of my mind that maybe I would kick up into a handstand near an animal or something else significant. As it turns out “something else significant” was a blast from my past known as “The Monkey Ship” — or at least what’s left of it. For those of you not familiar, or too young to remember, The Monkey Ship is a 1/3 scale concrete replica of Columbus’ flagship the Santa Maria, surrounded by a moat and concrete wall. It opened in 1933 stocked with 18 rhesus monkeys cavorting around on the boat, climbing small rope ladders and swinging from bow to stern. (Courier & Press)

The Monkey Ship was one of my favorite exhibits at the zoo. And apparently to others as well. Bailey Trela writes about the “Monkey Ship” calling it “an obscure Midwestern curio” and then mentions a racy little detail about the boat: it’s included in Vladimir Nabokov’s controversial novel Lolita. Nabokov writes about: “A zoo in Indiana where a large troop of monkeys lived on a concrete replica of Christopher Columbus’ flagship.” (Trela) Granted, it doesn’t say the name of the zoo, or Evansville specifically, but that sure sounds like the Mesker Park monkey ship.

So that begs the question that Trela and I both asked ourselves, “How did Nabokov know about the monkey boat in the first place? And why did he include it in the novel?” Maybe it was the novelty of seeing a bunch of monkeys running around on a concrete ship in Evansville, Indiana that caught Nabokov’s attention. But was he actually at the zoo? Stranger things have happened, but it’s tough to imagine a Russian-born novelist somehow stumbling upon a monkey boat in southern Indiana.

According to the NPR article, “Why Lolita Remains Controversial,” Nabokov [who was a professor at Cornell University in Ithaca, NY,] did a tremendous amount of research to get the details of American life right. He would do things like travel on the buses around Ithaca and record phrases, in a little notebook, from young girls that he heard coming back from school,” says Nabokov biographer Brian Boyd.

Could it be that one of the aforementioned school girls came to Evansville, visited the zoo, and had such a memorable experience at the monkey boat that she returned to the school talking about it? Perhaps Nabokov overheard the story, and then included it as part of the characters’ cross-county tour that included Mount Rushmore, Crater Lake , and the Corn Palace in South Dakota? (Trela)

Because the monkey boat was part of my childhood zoo experience, it seemed natural to encounter a group of monkeys on a boat. Would it really make enough of an impression to be included in a book about a pedophile and the object of his affection? Maybe it seemed just wrong enough and weird enough that it fit perfectly into this sordid little story.

And only now do I see where perhaps the monkey boat might have been “wrong” in the first place. As a child, I thought the monkeys had it made. Hanging out with their friends on a boat, swinging, having fun, and acting like — a bunch of carefree monkeys. Ah contraire. It didn’t occur to me that these swashbuckling primates might actually be unhappy spending their days on a concrete ship, in a moat, in the midwest.

Perhaps more ironic is that the grownups didn’t see anything wrong with it either — until the early 1990’s when the monkeys were moved to a primate house and the moat was then stocked with bumper boats. But think about it — for almost 60 years, nobody questioned whether monkeys might be happier swinging in trees with the ability to occasionally put their feet on dry land than stuck on a boat in a moat? Don’t get me wrong — I don’t think anyone was intentionally trying to deprive the monkeys of a happy life; I think people were so enthralled with their antics and the uniqueness of the display, it didn’t occur to the casual onlooker that this probably wasn’t the best way to house a bunch of primates.

So here we are in 2021, with no monkeys on the boat and no water surrounding it. It’s now a big empty concrete ship with a lone monkey carved onto the bow to remind us of the boat’s original occupants. I’m glad it’s still there — even if it is deserted. It stands as a quiet little monument to the past, and perhaps serves as a reminder that we can — and should — keep moving forward.