“I am currently under construction. Thank you for your patience.” — Picturequotes.com

On Tuesday, May 5, 2020, I, 57-year-old April Nading, became the proud owner of a brand new prosthetic hip. Yep. That’s right. This yoga practicing, handstanding, generally in good shape grandma now has a bionic part. Before you start guessing at the all the things that caused my hip deterioration at such a young age (the average age is 68), let me eliminate them for you. No I didn’t play too many sports as a kid. Actually, I never played organized sports of any fashion — unless you count drill team in high school, to which my husband would snort and snicker and say, “That’s not a sport.” And no, it’s not from too much yoga. In fact, yoga is good for your joints — and as a general rule isn’t known to accelerate their deterioration.

Truthfully, there isn’t a good reason, other than I, for some inexplicable reason, developed arthritis in my hip that pretty much ate away at my ball and socket leaving bone rubbing bone as I went about my daily life. Ouch! The pain started in 2018, grew progressively worse, and despite a couple of painful injections that provided temporary relief, it became apparent that a total replacement was my only choice for longterm relief.

I’ll admit this was a tough pill to swallow and a bit of a blow to my ego. Hip replacement? At my age? I do handstands for gosh sakes. I eat right and exercise regularly. This wasn’t supposed to happen to me. In my mind, only old and/or out of shape people got hip replacements. How would I explain this? How would I recover? How would having a fake body part effect my every day life? Would the handstands I’ve worked so hard to achieve become a thing of the past?

Though I eventually was able to get past the psychological aspect, I realized I was also faced with sadness — and fear. I felt sad that despite my best efforts, a major part of my body had given out and needed to be replaced with an artificial apparatus. I felt scared because any big surgery (and it is a big surgery) has its risks and possible longterm side effects. The hip replacement binder I was instructed to look over prior to my procedure was rife with warnings about blood clots, infection, pulmonary embolism, and a host of other complications including  blood vessel-nerve injury, post-op stiffness, pain, and — perhaps one of the scariest — hip replacement dislocation. Yikes.

But here’s the thing, despite my fears of things that might, but probably wouldn’t happen, the reality is that my quality of life was effected by that stupid bad hip. Yeah, I could kick up into a handstand, but going down the stairs afterward was accompanied by sharp pain and me saying, “OHHH!” every time I took a step. I could teach and participate in a power yoga class, but I literally limped out of the studio at the conclusion of practice. And the last pre-surgery walk my husband I took around the neighborhood caused such intense pain, that I humbly hobbled back to the house and collapsed on the couch in misery. All of the above brought about the realization that while I may seem too young for hip replacement, I’m apparently not too young to have a hip in such bad shape that I feel pain simply from walking around the block.

And therein lies the problem. While it would be easy to say that I should wait until I’m older, or the pain becomes debilitating, or simply avoid doing what hurts, grimacing through excruciating pain is not my style, nor would I want to intentionally avoid things in my life that give me great enjoyment — like yoga, handstands and walking pain free. I also believe that if there’s something available to fix what ails you, you use that something to fix it — regardless of age. I feel very fortunate that, coronavirus aside, we live in a great time for science and medicine. The newest hip replacement procedures leave you with few restrictions (no running or snow skiing — neither of which apply to me) and are projected to last a lifetime.

So, no handstands for me — at least for a few weeks. But give me time. I am a woman with determination, and I’m not going to let something like a little hip replacement keep me from doing what I love. And I really do love doing handstands. Who knows, my new and improved hip may make my handstands — and other things — better than ever. Stay tuned. Grandma’s recovery is gonna be great! 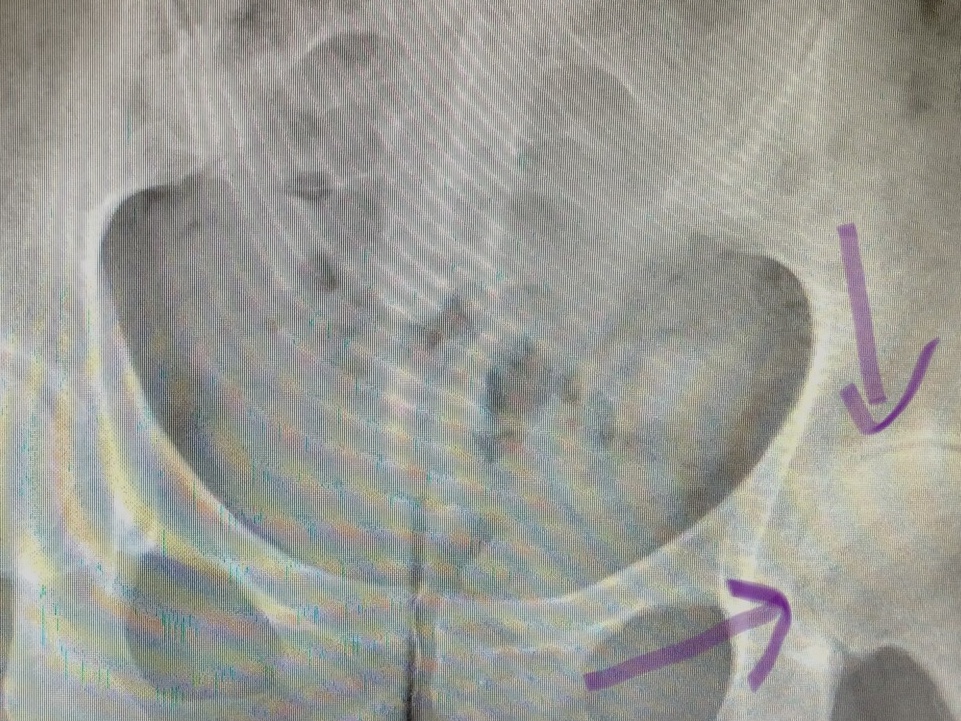 My hip before surgery. The arrows point to where it was bone on bone.

Why I'm Still Wearing Jeans (and Other Regular Clothes) During Quarantine

Grandma Gets a New Hip Pt 2: Pushing Aside Pride to Use a Walker