Get Posts in Email
Watch on Youtube
“The power of determination will make you unstoppable.” — Jean Charest

I admit that the thought had occurred to me. Things go wrong with any surgery. And I was getting a new hip — what if it didn’t cooperate like the old one? What if I couldn’t get it to kick up or push off properly and my handstands simply wouldn’t happen? What if my doctor was wrong — I mean how many patients of his have ever done a handstand? Let alone done one after hip surgery? For that matter, how many people care if they can do a handstand period?

I do  — and once I was up and walking again, determination became my mantra. I was chomping at the bit to put my hands on the floor and kick up, but I was also painfully aware that these things can’t be rushed. While excited at the prospect of doing a handstand, I was fearful of falling and doing more harm than good — so I took it easy at first. About a month after my surgery, and after conferring with my physical therapist, I began walking my feet up the wall and bringing some weight forward into my hands. If I fell out, I made sure to land on my right leg (the non-operated side). I did this a few times a day for several weeks and then asked the PT if I could try kicking up at the wall.

We agreed that I should probably kick up with the left leg (kicking up with the right would require weight and exertion on the left to push off from the floor) and a few days later — when I felt confident that I wasn’t going to hurt myself — I gave it a whirl. The first kicks were awkward and clumsy, but there I was, kicking up into a handstand at the wall! I was relieved and happy, but still faced one big hurdle — doing a handstand without support. A few weeks later, my PT gave me the nod to proceed, but I was still afraid. What if I came down too hard and hurt my hip? Or fell and broke something? I realized my real fear: What if I couldn’t do a handstand anymore?

I confess that I had to psyche myself up before putting my hands on the floor and kicking without the wall. But I reminded myself that since I was confidently holding myself up at the wall, I was landing on my right foot (most of the time), and it had only been a little over two months since I was doing handstands in the middle of the room, that I was probably OK to give it a go. And I did it. Oh, it wasn’t pretty, and I cartwheeled out a lot. But I didn’t hurt my hip or any other body parts, and three months after my surgery, I am now getting a little hang time with my handstands.

I’m not where I was before my surgery — yet. But I know with practice and a lot of determination, I’ll get back to where I was pre-surgery — and then, I’ll get even better. 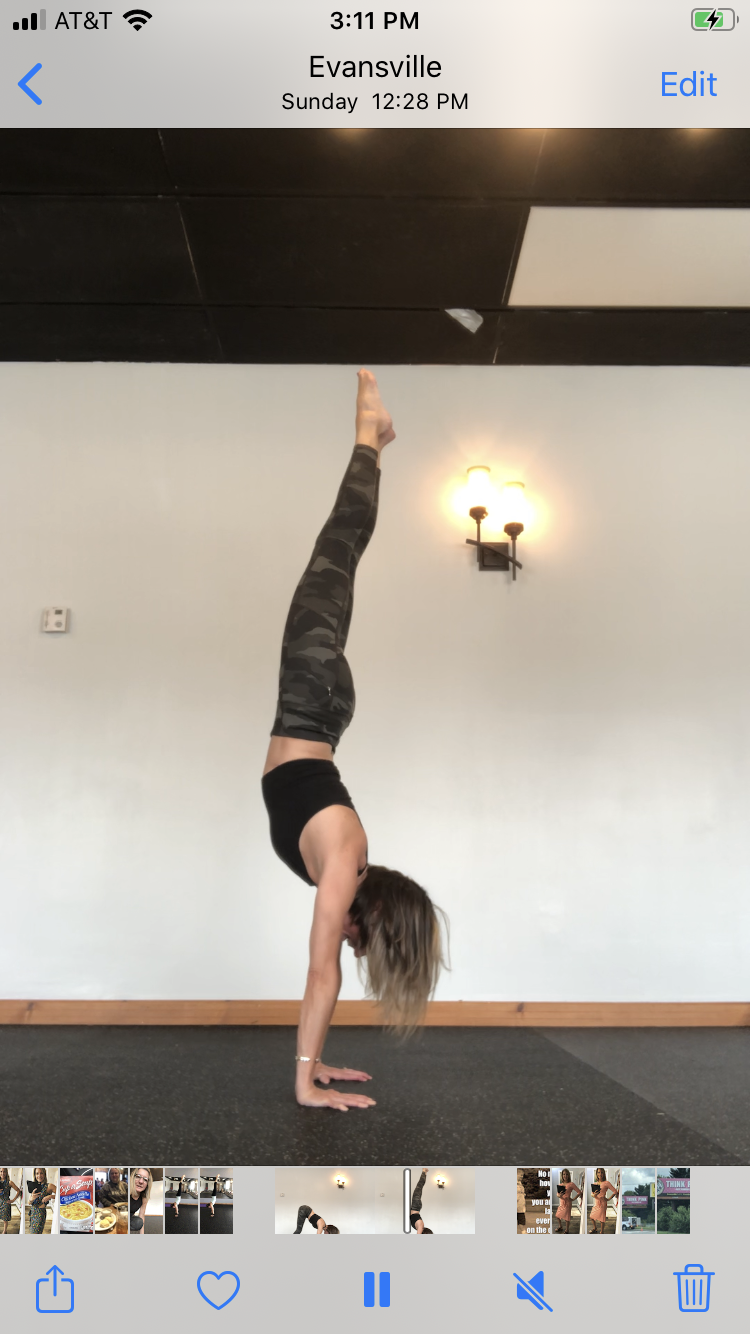 That’s me — kicking up into handstand three months after hip surgery!

The Power of Plank Pose

The Best Birthday Ever!