Recently one of the younger handstanders I follow on Instagram (admittedly, all the handstanders are younger than me) posted how discouraged she felt about her handstand after a four-day lapse in her practice. She even used the word “depressed” to describe her current mood as a result of her performance. Now keep in mind that this girl presses into a handstand slowly and with control, holds until she’s ready to come out — and she does that the same way — slowly and with control. And she was still able to accomplish this admirable feat, even though she’d missed four days of practice. Yet for her, this wasn’t enough.

At first, I laughed out loud at her folly, and in my mind compared her poised handstand videos with my clumsy kickups. “She must be kidding,” I thought. “Her handstands are fabulous.” I felt bad for her that she was so despondent about her handstand, and sent her a glowing compliment, but it made me wonder if I would be harder on myself if I had started handstanding when I was younger.

As an old broad who learned to handstand later in life, I don’t really care what my handstand looks like. I’m just happy that I’m doing it. Even though I’m working to correct my banana back and would some day like to do a press, I don’t really care that I haven’t or that I can’t. I experience so much joy and happiness simply from kicking up and holding for a few seconds, legs flailing and back bending, that the particulars don’t matter. But if I were younger, instead of rejoicing, would I constantly be judging? Would I second guess my practice and perhaps even consider stopping?

For me, handstanding is a passion without pressure. I’m not being graded, or paid, or judged on my handstand abilities (or lack of). I’m not up for any awards or certificates or promotions based on my inversion abilities. If anything, I feel especially privileged that I began this journey later in life and then continued despite setbacks and hurdles.

But if I had started when I was younger, would I still be doing it now? At some point, would I have become discouraged at my seeming lack of progress and given up entirely? Or lost interest? Or simply replaced handstanding with another activity that gave me similar joy and a feeling of accomplishment? Would I constantly compare myself to others rather than marveling at their progress? 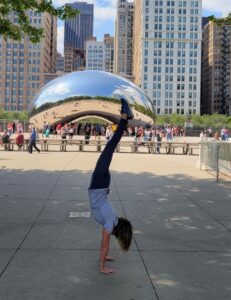 My handstand isn’t perfect — and I’m OK with that!

Perhaps my contentment comes with maturity. Or perhaps it’s a difference in perspective. Perhaps it’s my maturity that gives me this contented perspective. I do want my handstand to get better, and I hate when I miss a few days of practice due to illness, time constraints, etc., but I’m also OK if I don’t improve right away, or if I lose a little ground during time off. I’m just so gosh darned happy that I took on this challenge and worked so hard to accomplish it, that an occasional off-day simply doesn’t matter.

But here’s another question: Would my handstand be even more spectacular if I had started when I was younger? Older. Younger. At this stage of my life, we’ll never know the answer. What I do know is that I have a passion that gives me immense pleasure, and the handstand I have now is the only one that matters.

5 Things You Need to Do a Handstand -- or Anything Important

Is Working Toward a Goal More Satisfying Than Achieving It?