“One of the most important keys to success is having the discipline to do what you know you should do, even when you don’t feel like doing it.” — Unknown

“If anything can go wrong, it will.” — Murphy’s Law

I’m a little embarrassed to say that I don’t have a home yoga practice. Other than handstands and abs, I don’t practice yoga at home. I started to backtrack and say “hardly ever,” but really, it’s never. Oh, I’ve gone through brief spells where I decide, “I’m going to start every day with a Sun Salutation,” or “I’m going to start watching more yoga videos and practicing with them,” but despite my best intentions, it never lasts more than a few days. For one thing, I’m a hot yoga snob, i.e., I don’t like doing cold yoga. Maybe it’s because my yoga beginnings were in a hot studio, or maybe it’s because I’m so used to the heat that I feel like I’m missing out when I’m not practicing in a hot room, but I really don’t enjoy “cold” yoga. (Maybe I just need to learn to get out of my head and remember that I’m practicing yoga and that it’s so beneficial to me — whether it’s hot or not — and quit being a big baby about not having heat.)

Besides missing the heat, I also miss practicing in a studio with other people — which probably also explains why I’ve never been successful working out in a gym. Not only do I not enjoy using equipment and weights, I’m not disciplined enough to complete an actual workout on my own, and wind up calling it a day after a few half-hearted reps. For me, part of the joy of practicing yoga is doing it with others. There’s something about being in a room with other people, practicing together, holding poses, with an instructor leading us, encouraging us, and, sometimes, correcting us, that keeps me motivated — and keeps me coming back for more. And while you’re not talking during yoga or making physical contact with one another, you’re still doing it with others, and forming a community of sorts. It’s that community that makes yoga so wonderful.

That being said, when the yoga studio temporarily closed due to the coronavirus/stay-at-home orders, and we decided to stream practices from our homes, I immediately signed up to lead at least a couple classes a week. Mostly because I knew that if I didn’t teach a class, I would never do a class. And right now, while I’m so out of my normal routine, I desperately need to stick to a regimen of doing yoga.

This volunteer effort, though,  brought a whole new set of problems. First, I had to come up with a suitable place in my house for shooting video and practicing yoga. Since I didn’t practice at home, I didn’t have a place set up to home practice. And not only do you need an open area void of furniture and other obstructions, you also need to have a wide enough view that not only lets viewers see both standing and floor poses, but also has good lighting and is conducive to good sound. Easier said than done, but I finally decided on an upstairs bedroom.

Let me just say here that I am not, in any sense of the word (or words), techno-savvy and my live-stream videos have been riddled with problems. My first one (which was actually from the studio — but by myself), I had the heat on too high and not only did my iPhone overheat, but also the studio iPad, meaning I had to stop and start over — twice. The next one at my house was better, but too dark. I thought the last one was great — better lighting, fairly smooth sequence — until I looked at the video afterward and it was sideways! (See screenshot below.)

Even though the yoga students who’ve watched my videos are probably hoping beyond hope that I’ll stop live-streaming and let those more proficient with technology lead future yoga classes, I have a few reasons for refusing to give up. 1. We’re switching to Zoom for our classes, which I’m hoping will help eliminate some of the technology problems. 2. I don’t want to be that 50-something-year-old who can’t seem to master a simple live-stream and throws up her hands in despair with the words, “I’m too old to get this!” 3. I love teaching yoga and I want to keep doing it. And dare I say it, I’m even starting to enjoy my home practice. 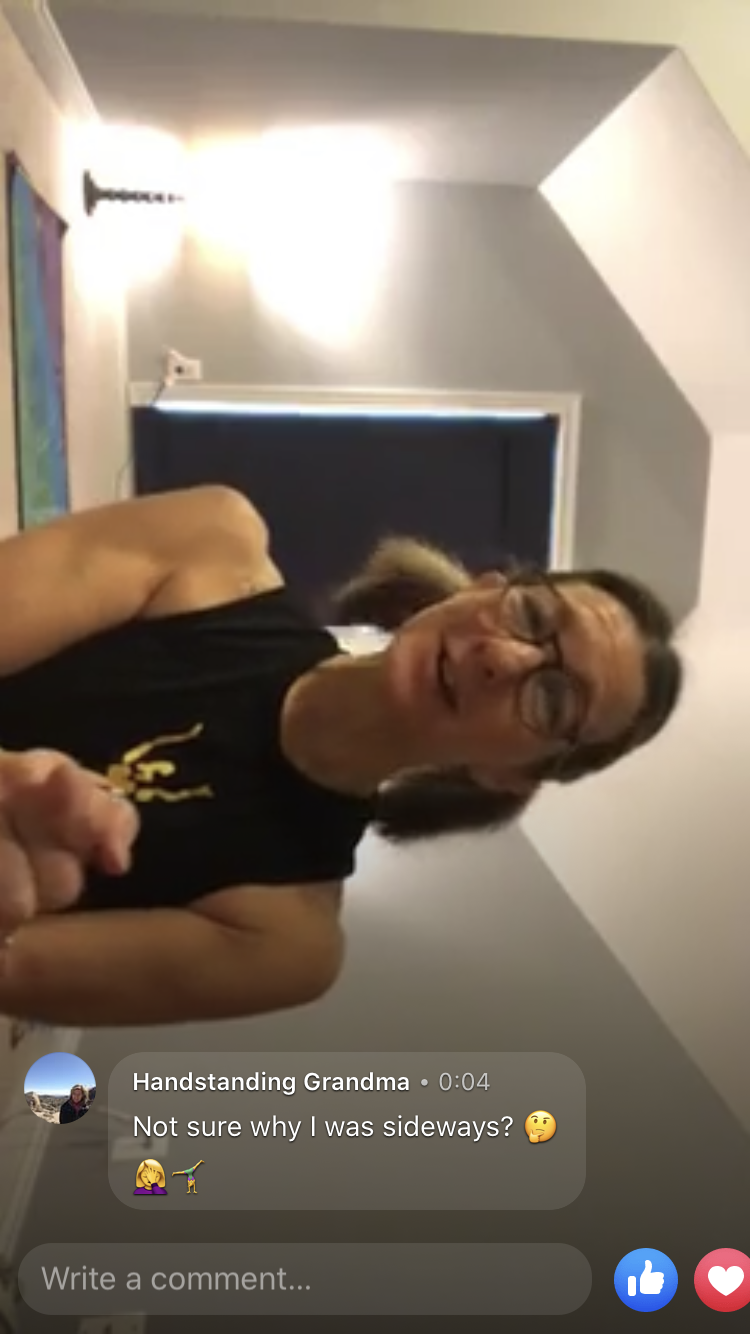 What I Learned from Ground Beef

Being Quarantined Has Improved my Handstand