“Roses are red, violets are blue, incorrect grammar will never be cute.” — Anonymous

On any given day, if you watch the news, or read posts on Facebook, or sometimes have conversations with relatives and co-workers, someone will inevitably say, “I seen” when they should have said, “I saw.” And even though I hear it just about every single day, I still find myself cringing inwardly. That’s a lie. I don’t cringe inwardly; I wince and make a face outwardly. Sometimes I even roll my eyes or sigh heavily. The bad part is, they may actually have something somewhat important to tell me, but after hearing “I seen,” I’m no longer listening.

When did “I seen” because so prevalent? And apparently so acceptable? And how come everyone else isn’t cringing like I am? I’m not kidding, when I hear, “I seen” the words go right down my spine, my ears hurt a little, and I’m no longer concentrating on what the person with the offensive grammar is telling me. Instead, my thoughts wander. Why did they say that? How can they possibly think “I seen” is ever acceptable? What school did they attend that taught “I seen” instead of “I saw”, or apparently let it slide when used incorrectly? Who started this? And why haven’t they been stopped?

Some people mistakenly think I’m correcting the grammatically challenged when I mutter, “I saw” after hearing someone say, “I seen”, or “He doesn’t” after someone mistakenly says, “He don’t.” But I swear to you, I’m not correcting them (although it wouldn’t be the worst thing in the world if they learned not to say “I seen” if they think they’re being corrected) — instead I’m trying to appease the Grammar Nazi in my head that is relentlessly screaming “I SAW! I SAW! I SAW!” and won’t stop screaming until the words are spoken out loud — and correctly.

It’s not pleasant constantly wincing at other people’s grammatical faux pas, scrolling with disgust past Facebook posts with “loose” instead of “lose”, or biting my tongue to keep from shrieking, “WE WERE!” when an unsuspecting relative says, “We wasn’t.” Sure this natural compulsion for grammar helped me in English and Composition classes, and makes writing fairly easy for me (I am writing a blog and do some sort of writing every day in my full time sales job), but sometimes I consider it more of an affliction than a blessing. Wouldn’t it be nice to watch TV and not cringe at every grammar blunder? To simply be oblivious to language infractions?

I’m not so sure. First of all, it’s simply not possible for me to not notice and/or ignore bad grammar because it is truly a part of my DNA. My parents were conscientious grammarians (my motherly frequently responded, “Between the A and the T” when we asked, “Where is it at?”) and overall I’m glad for their due diligence. I don’t remember ever studying for an English test, and I actually enjoyed diagramming sentences (I know — nerd alert). Second, I can’t apologize for doing what’s actually right, nor do I think there’s anything wrong with upholding standards that are slowly but surely losing their importance.

I don’t care so much if someone says, “lay” when it really should have been “lie” or “theirselves” when obviously it’s “themselves”, but the blatant infractions are simply impossible to ignore. Sorry everyone, but I am silently (and occasionally audibly) correcting your grammar. And it’s not because I want to — it’s because I have to. And if you’re “I seen”-ing, I’m not listening. 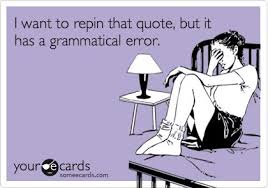 Does a Half-Second Handstand Count?