“The smallest thanks is always worth more than the effort it takes to give it.” — Unknown

Yesterday, I went grocery shopping (at a fairly large regional chain store), and after ringing up my purchase, the cashier said, “Here you go,” as she handed me my receipt. “Here you go”? I paused a moment waiting for “Thank you,” or “Have a good day,” but “Here you go” was all I got. Keep in mind that I overlooked the fact that she didn’t say “Hello” as she began swiping my items through the scanner, and I ignored the absence of the obligatory “Did you find everything OK?”, and I even avoided rolling my eyes as she and the sacker continued their personal conversation, ignoring me the entire time I was standing at the check out. But not saying “Thank you” at the end of the sale just feels wrong — and unfortunately is becoming more prevalent. What happened to showing a smidgeon of gratitude by saying “Thank you” at the end of a transaction?

Are they not thankful for our business? There are lots of other groceries I could choose — it seems like they should be glad that I chose theirs and not one of their competitors down the street. I’m not expecting a party or fanfare, mind you, just a little bit of gratitude, appreciation, and  — heaven forbid — maybe even a little eye contact. And it’s not just the grocery. Over the weekend, I made a purchase at a store in the mall and the associate behind the counter said nothing at the end. Crickets. Merely handed me my bag and immediately turned and began talking to the clerk at the next cash register. Did I miss something? Are we supposed to be thanking them for having the merchandise and then taking the time to ring it up?

For the record, back in the 80’s I worked several years in retail, so I know that sometimes you deal with unpleasant customers, demanding managers, and hours of standing on your feet without a break. As a result, you sometimes have to dig deep to force even meaningless pleasantries when dealing with the public. But a thank you should be perfunctory. I don’t even care if they say it with a smile — I just think they should say it.

It seems like this occurs most often with younger — like in their 30s and younger — employees. Which makes me wonder why the heck they don’t know to say thank you and why it doesn’t come naturally. I mean, I don’t recall during any of my retail trainings that I had to be instructed to say “thank you” at the close of a transaction. Don’t these non- thank you’ers shop anywhere? Are they simply immune to thank you’s and don’t notice whether they happen or not? Maybe they simply don’t care. Maybe to them having to interact with a cashier with anything more than transacting money and then walking away with their purchase in hand is a burden, and as a result they think nobody else wants to deal with the niceties either.

But I do like a “Thank you” when I buy something. In this non-verbal world of texts, emails, and tweets, a nice look-me-in-the-eye “Thank you” seems even more important. We are human beings, and I believe we should make the effort to at least be polite — especially when our job calls for us to interact with other people. Perhaps retailers need to offer a full paragraph in their handbooks explaining the importance of gratitude and how saying “Thank You” after every transaction is a polite way of showing appreciation. This may be why so many businesses are turning to kiosks and self check-out lanes — machines don’t have to be trained to be nice, they’re programmed to be polite.

Some establishments do this already. I can think of one national fast food restaurant where the employees have a scripted greeting and a scripted close using the words “Thank you” in both — whether you’re at the counter or using their drive thru. I know it’s a script and they’re probably forced to say it, and some of them probably don’t mean it when the words come out of their mouths, but it’s one of the reasons I’m a return customer. And it just makes me feel good  — and appreciated — to hear them say it.

Thank you for taking the time to read this. I really appreciate it. 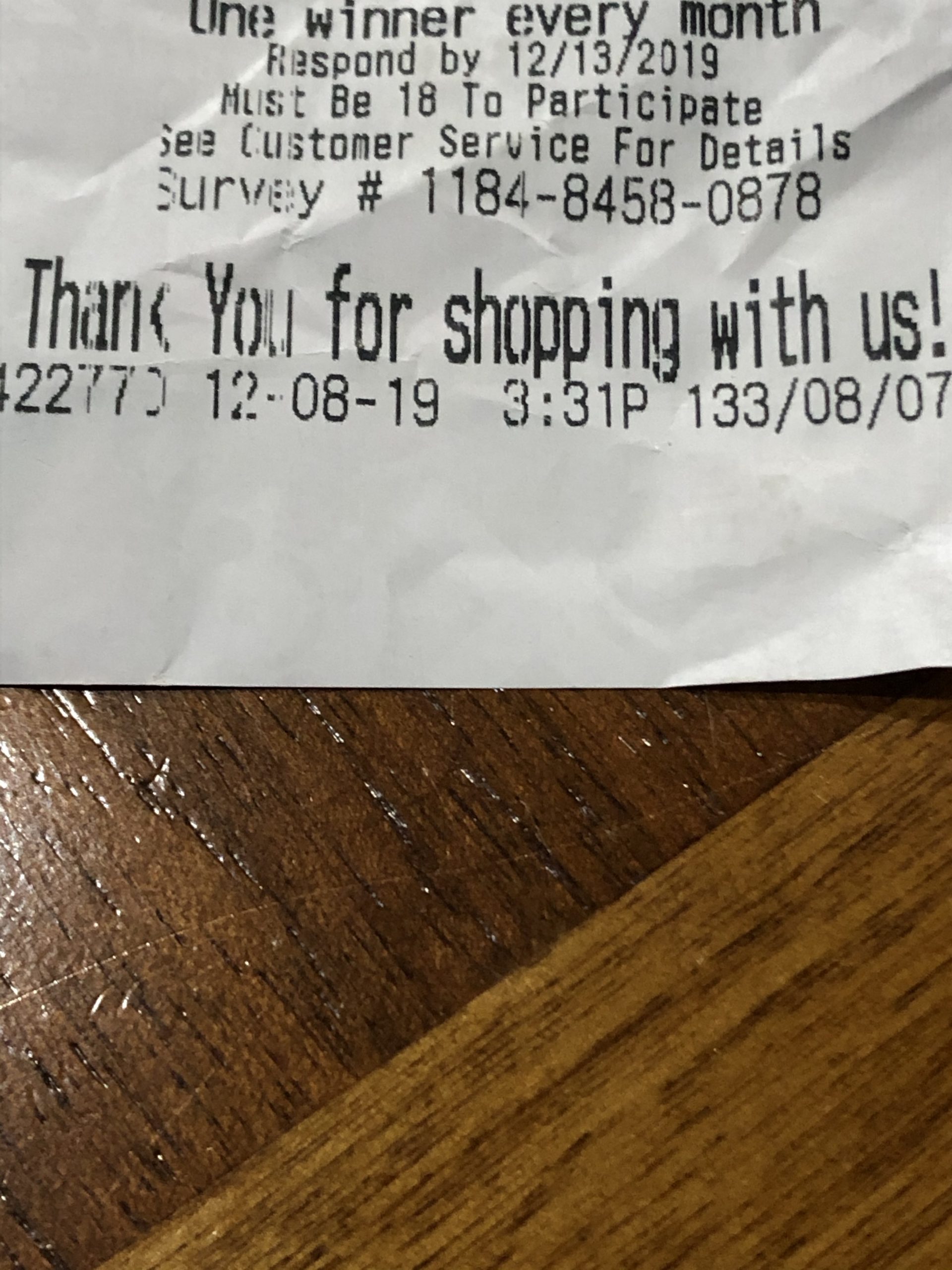 At least they say Thank You on their receipt.

I Went Back to the Wall

Everyone Should do Handstands. Seriously.