Technically, I began my handstand journey when I turned 50, but I didn’t really get serious about it until the approach of my 56th birthday. That’s when I started this blog and began telling anyone willing to listen that I was going to nail a handstand by my 56th birthday. Spoiler alert: it didn’t happen. I still remember the disappointment I felt as my 56th birthday loomed and I wasn’t handstanding with any hold time in the middle of the room. I was trying as hard as I could. I practiced every day. I had set my goal. Why wasn’t handstand happening the way I wanted?

But, after six years of trying, I was a heck of a lot closer to achieving this seemingly unattainable goal than when I started. And even though I see now that my self-imposed deadline was a tad bit over ambitious, giving myself a timeline and putting it out there for the world to see inevitably helped in my progress. I’m a big believer in setting goals and working toward achieving them — and I especially like the ones that include a timeline — but the handstand goal is not one to which you can attach time constraints. It may happen in a year, or it might take five, six, or even eight (as was the case for me). In fact, it’s been my experience that the more I pressure myself and try to hurry things up (at least with handstands), the worse I get. It’s as if I can’t get out of my head enough to focus on the mechanics of what I need to be doing to kick up into a handstand and instead dwell on the goal of when I’m going to it.

In the meantime, I remind myself that I’m still trying, I’m not giving up, and I’m definitely improving. Think about what all is involved in learning to do a handstand as a middle-aged woman: strengthening arms and shoulders to make a good foundation for holding yourself up; putting your hands on the floor next to a wall and then willing yourself to kick your legs up with absolutely no idea of how hard they’re going to hit — or if you’ll be able to hold yourself up; finding the courage to one day put it all together and try kicking up in the middle of the room. Oh and then there’s the fact that you’re balancing. On your hands. With not a darn thing to catch you when you fall. And you’re in your 50’s.

With all those factors coming in to play, how could I possibly expect that I would choose a date and then expect a handstand to magically happen? But aren’t we all guilty of wanting immediate gratification and then ready to give up when our goals aren’t met? If I hadn’t set the somewhat unrealistic goal, though, I wouldn’t have kept trying. And I wouldn’t have improved enough to keep me going, long after my 56th and then 57th birthdays rolled by with me still not quite where I wanted/thought I should be in my handstand journey. Thanks goodness I kept going. At 58, things have started coming together and the handstands have started happening.

Even though it still takes me a few times to kick up and find a good hold, I know that my handstand is now pretty darned good. And during those occasions when I still beat myself up for not landing the handstand as quickly or holding for as long as I’d like, I remind myself that hurrying a handstand — and most important things in life — will not lead to success. 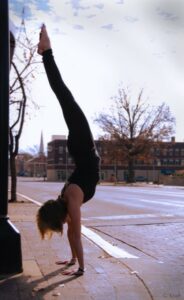 "Just One More Time..." Is Probably a Lie